The Flute Sonatine came at the height of my obsession with the works of Pierre Boulez. In 1947, he wrote a Flute Sonatine for piano and flute as a result of a suggestion by his then teacher, René Leibowitz. with whom he was later to have a notorious falling out.

"With a red pen, [Rene] Leibowitz began marking up the manuscript [to Boulez's first sonata], then dedicated to him. Grabbing the score, Boulez fled, shouting at Leibowitz "vous etes de la merde!" Three years later, Boulez's publisher Herve' Dugadin asked him if the dedication should remain on the printed score. As Boulez shouted "Non!" he stabbed the manuscript with a letter opener until it was virtually in shreads."

His Sonatine fuses together the two waring factions of Stravinsky and Schoenberg in terms of rhythm and harmony. It is described by David Schiff as,

releasing in the sonatina an explosion of musical violence, nervousness, and instability.

My Flute Sonatine, for solo flute, is intended to have a similar effect. It's frantic wild leaps of the second movement are possessed with a wildness of spirit that is close to insanity.  The struggle to play the music is part of the effect.  Brian Ferneyhough spoke about this in an interview with Colin Blakemore about pushing the performers to the extremity of their capabilities.

The first movement is somewhat different to the second. It starts very quietly, almost timid in character.  The lines of canon are clearly exposed.  The notation helps to reveal the contrapuntal writing. Each phrase has it's opposing counter theme, usually inverted.  Steadily, the momentum gathers pace and builds up to the frenzy that is the second movement.

The American virtuoso flautist, Nancy Ruffer is the performer on this recording. 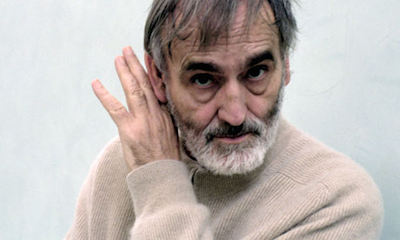